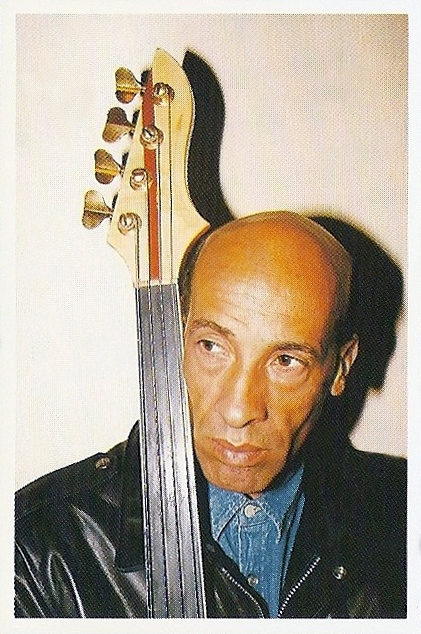 The story of Dudu the bass player

Guided by instinct, the bass in my hands played by itself… It made me discover the sound.

Vigon and the Lemons : the first band. Rock and rhythm’ and blues were our food.

Contests and various springboards were just excuses to propel us into the world of show business in Paris. We did not know anything, but guided by instinct we were tracing our way.

Over a short period of two years I entered the professional world, without any experience of solfege and any musical theory.

Michel Polnareff, Nino Ferrer, Jacques Dutronc, Gilbert Montagné and many others in the sophisticated jungle of the trade I discovered, together with my ignorance of music and life.

In the beginning, I opened a lot of methods that I did not understand, I even felt that many of them were made to better mislead me. It was the saga the warrior’s path.

Luckily, I kept a few pulse inside me, instilled by Manu Dibango. He had taken me into protection by introducing me into the orchestra of Nino Ferrer and he had decoded me on paper of the rhythmic writings that I lived naturally. In contrast, I kept nothing from the conservatory that I had the good conscience to follow.

Pop Music and Jazz Fusion take me to Joel Daydé, and Zao (the big jump – finally free – into the music …). Two superb album, and on the way to England with the band Clearlight, and works for the Virgin Studio with great musicians such as François Jeanneau, David Cross (King crimson), Bill Bruford (King crimson) .

Back in the Parisian studios, productions and arrangements follow : In the beggining by a first project for a young group named Semolina, which will then become as soon as it signs its contract Téléphone band.

In this vein, Mama Béa Tekielski, Emmanuel Booz, the new Clearlight in the company of Ian Bellamy and Didier Lockwood, Armande Altai, as well as various music images for pub, and television.

During these periods and sound adventures, I had also undertaken a master’s degree in musicology (I was reconstructing the puzzle), and worked on my Mozaiques and Boomerang albums, surrounded by the prestigious Manuel Villaroel, Fred Frith (Robert Wyatt), Pierre Moerlen (Gong), François Jeanneau, Claude Olmos (Magma), David Rose, David Cross.

In the years that followed, strengthened by the experience of sound, the discovery of the fascination of the image and the music, it followed a series of events between paintings, videos and plastic arts, especially for the living room of the model door of Versailles.

Between these periods the passion of theory had transformed me in composition and especially in bass design, which I saw as multiple.

Consequences for the present time, «Les contes du bassiste» which is a guide to navigation in the sound spaces opened by the basses, a collection of influences and perceptions driven by instinct.

Welcome to the planet…